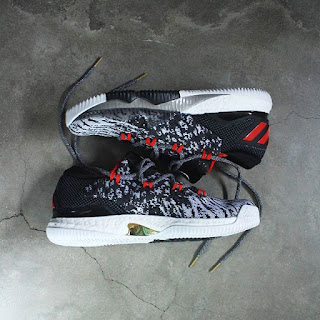 The Adidas CNY basketball collection is starting to reach in store shelves and is already available at various NBA Stores here in the Philippines. It features a black and white upper which I think is Primeknit which would likely represent the rooster feather. Red stripes branding can be seen as well with gold hits on the TPU plate underneath. A clean white solid rubber outsole was used and it looks like adidas isn't going to fancy for this year's Chinese New Year theme. I hope they would incorporate that mahjong tile graphic design in the insole just to be consistent with the adidas originals line. Like I said earlier, you get them now at the NBA Store here in the Philippines.