More details on the D Lillard 2 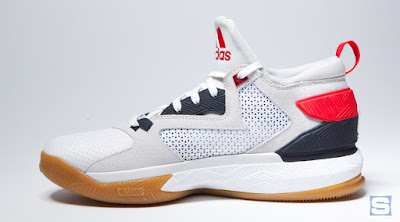 We all witnessed the unveiling of the Adidas D Lillard 2, many are still curious as to what the tech specs is going to be. Luckily, a little researching would really help and here is what I found out at Sole Collector. Overall, a lot storytelling can be said and personally it doesn't matter to me as long as it works especially if they use it to promote the actual tech. Starting with the upper, a combination of engineered mesh and jacquard which is good as it promotes a comfortable fit and luxurious look. Fit and lockdown could be better since I was not able to try the Lillard 1. Evidenced by the TPU lacing system, support is another aspect which will be upgraded as well. Speaking of upgrade, the cushion will now be made up of Adidas' bounce cushion which was according to them more utilized in running. Being a dual-density foam setup, Bounce could be another golden nugget which Adidas basketball will use in their future models. Obviously, these specs would really help Lillard in his game and I do hope it also gives us the same benefits as well.