Analykix Giveaway: Who will be the champ? 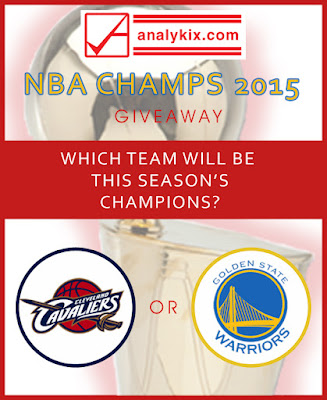 EDIT 06/17/15: CONTEST HAS ENDED BECAUSE THE GOLDEN STATE WARRIORS WON GAME 6 JUST THIS MORNING! STAY TUNED FOR THE ANNOUNCEMENT ABOUT THIS CONTEST.

The NBA Finals is finally here. Two teams -- the best in the East and West Conference -- will be tested once again as they give their all to get that coveted trophy. I can go on and on and on and say all the words to describe this major event in basketball, but one question will linger throughout the whole conversation: Who will win the NBA Finals, the Cleveland Cavaliers or the Golden State Warriors?

Now, why don't we make it a bit interactive? As a way of saying thanks for all the support that you guys gave me, be it through facebook  message or email, or even reading my blog posts (it really mean so much to me), I will be hosting a small giveaway* here on Analykix! I will be raising this question:


Who will be this year's NBA Playoffs Champion?

Comment on this blog post which team you think will win this year's playoffs. Add to your chances of winning by liking the Analykix facebook, twitter, and instagram pages. I will be randomly picking out one winner (FROM AMONG THE PEOPLE WHO PICKED THE WINNING TEAM).

*Giveaway is open to Philippine residents only*