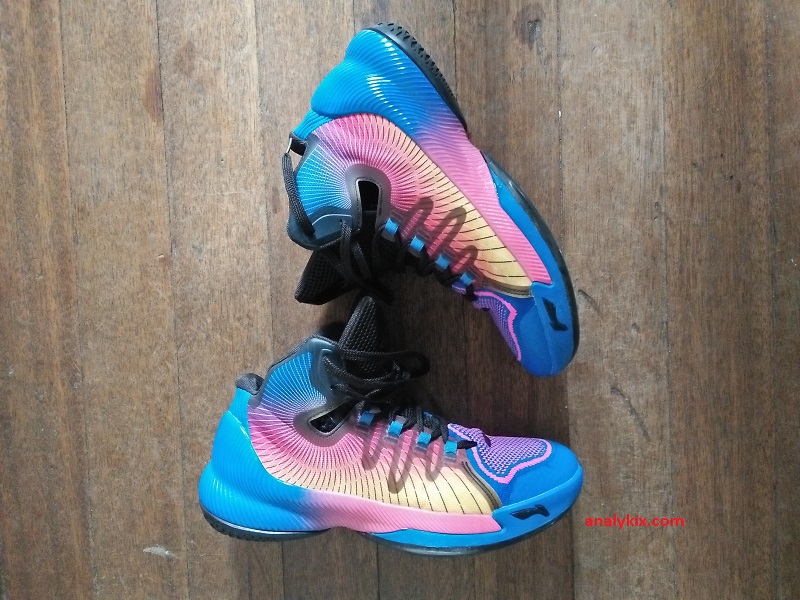 With the Way of Wade series being the go-to choice for Li-Ning brand, a lot of people are wondering how do their budget line fare nowadays? Today, I'm going to give you my performance review for the Li-Ning Shadow Walker 2017. If you want to know the tech specs of the shoe, you can view them on the Best Foot Forward <HERE>. Now let's jump on my performance review. 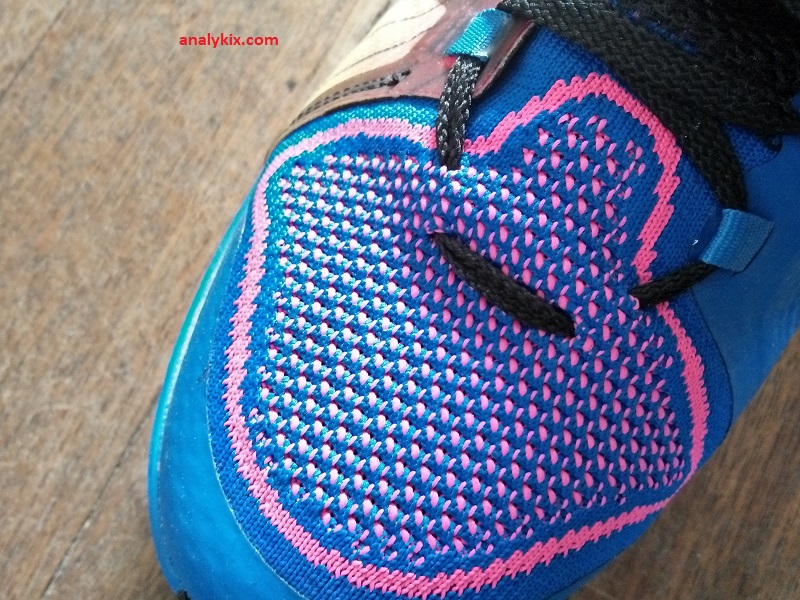 Li-Ning played safe by using a combination of textile, knit, with fuse materials for the upper. It is lightweight and pretty durable. What Li-Ning did was give you a taste of everything by throwing in latest tech but not overdoing it just to make sure that the shoe will be durable. They were able to achieve in making the shoe lightweight which I appreciate. However, the use of knit material in the forefoot isn't too noticeable. It isn't mind-blowing because it is just in the toe box area but still, it is pretty comfortable since I didn't felt any pinching when the shoe flexes. They also used their Dynamic Shell which would give the shoe a custom fit, but I'll discuss that later under the fit section.

For this particular shoe, Cloud foam was used which is ideal for those who prefer court feel. The cushioning could be more felt in the heel than in the forefoot. When it comes to Li-Ning's cushion source, I still favor Bounse than Cloud and that still remains here. I just think that my knees and feet will endure more basketball games in 1 night in a Bounse cushion than in a Cloud cushion (when it comes to wearing Li-Ning kicks). But if you want a low-to-the-ground feel in the forefoot, this is a good choice. I can also see guards will favor this shoe since a lot them would rely on court feel. The downside would be since the forefoot cushion is not that thick, foot fatigue might be an issue for long basketball runs. If you just play casually for about 1 hour or just light pick-up ball games, this would easily do the job. But for long games like 1-day leagues, 3-hour basketball sessions, or if your team happens to be on a roll in a pick-up game where the winning team remains on the court, you might feel the brunt of the stress after the game. If you favor a shoe with tons of cushioning, this might not be the one for you since Cloud is more low profile compared to Li-Ning's other cushion source like Bounse and Cushion. 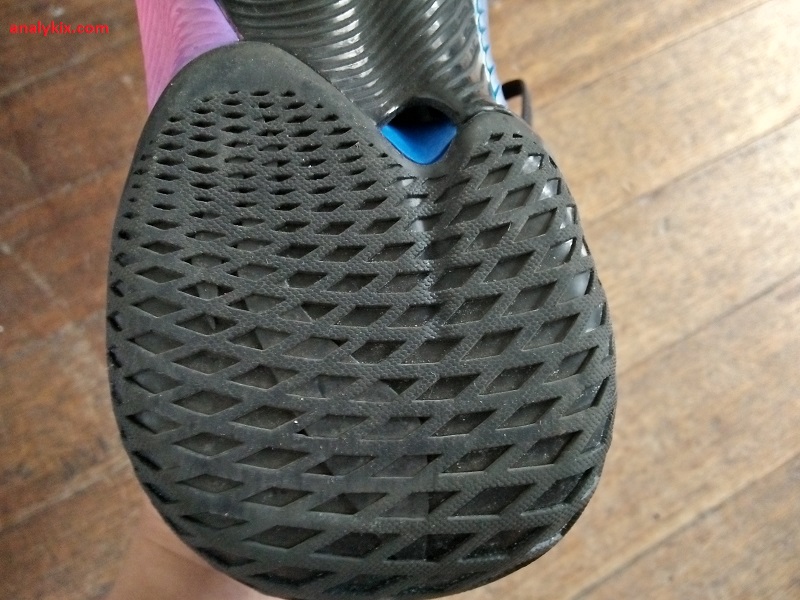 I was able to play in these both in wooden and cement courts. With both courts, I was able to get great traction. Even when the court is duty like the cement court that I was played in last week, this one grips the floor pretty well and I have to say that I am really satisfied with the shoe's traction. It is also pretty durable so this could be a good choice for outdoors are well. The pivot zone helps you with curls or spin moves so whether you are in attack mode or on a hunter on the defensive end, this would really be helpful to you. On clean courts, the grip might even be too much to the point that I caught myself twice almost getting ankle broken on the defensive end because I felt like the shoe stuck to the court. While the outsole has a circular-like traction pattern, it is a pretty good one especially since we are used to get a good traction in a herringbone pattern. I think it's a combination of good rubber and traction pattern which is not linear. 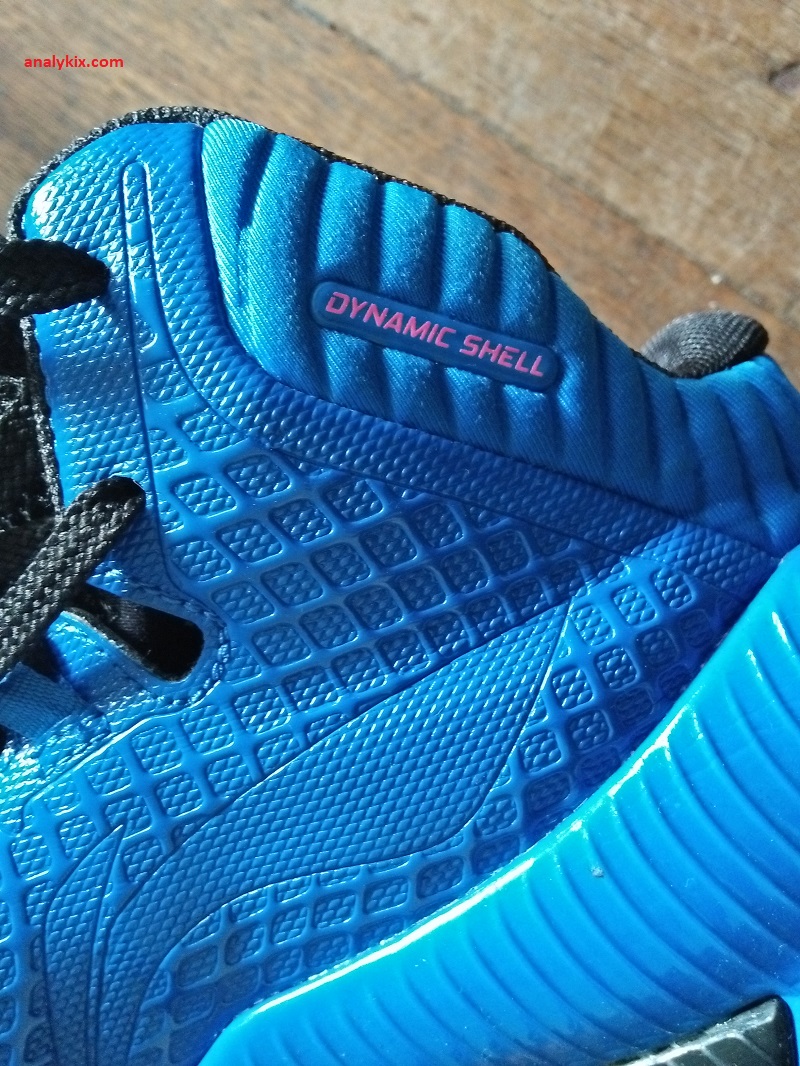 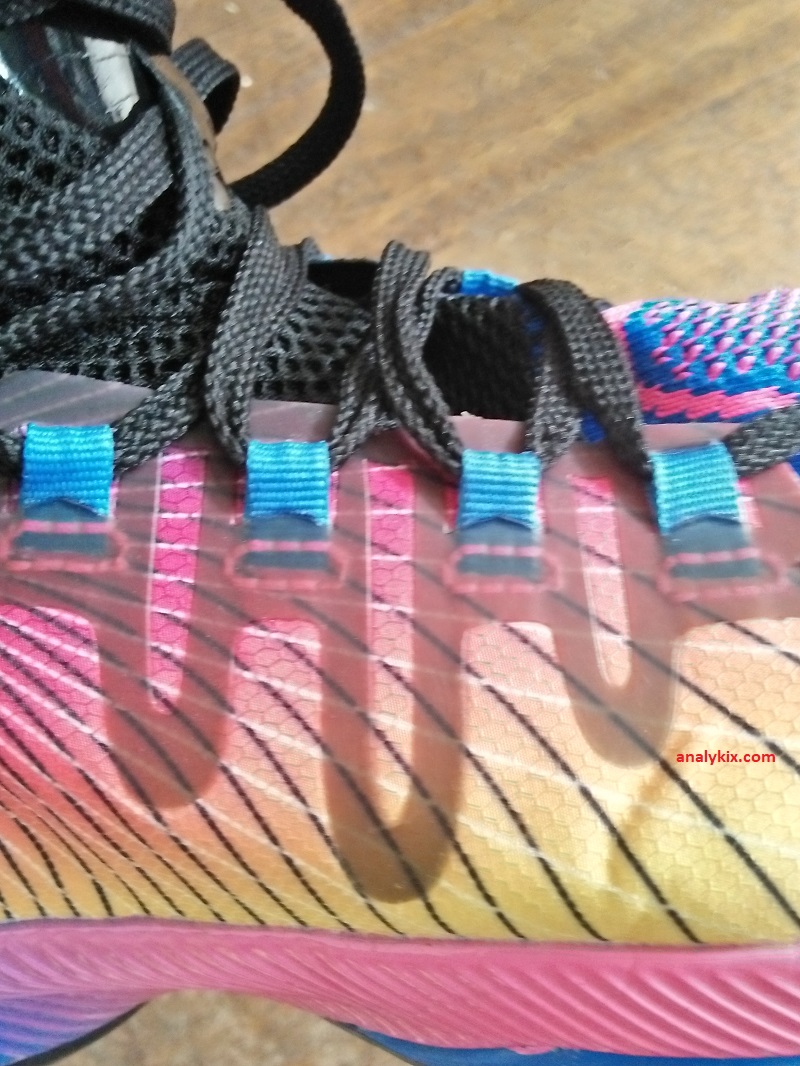 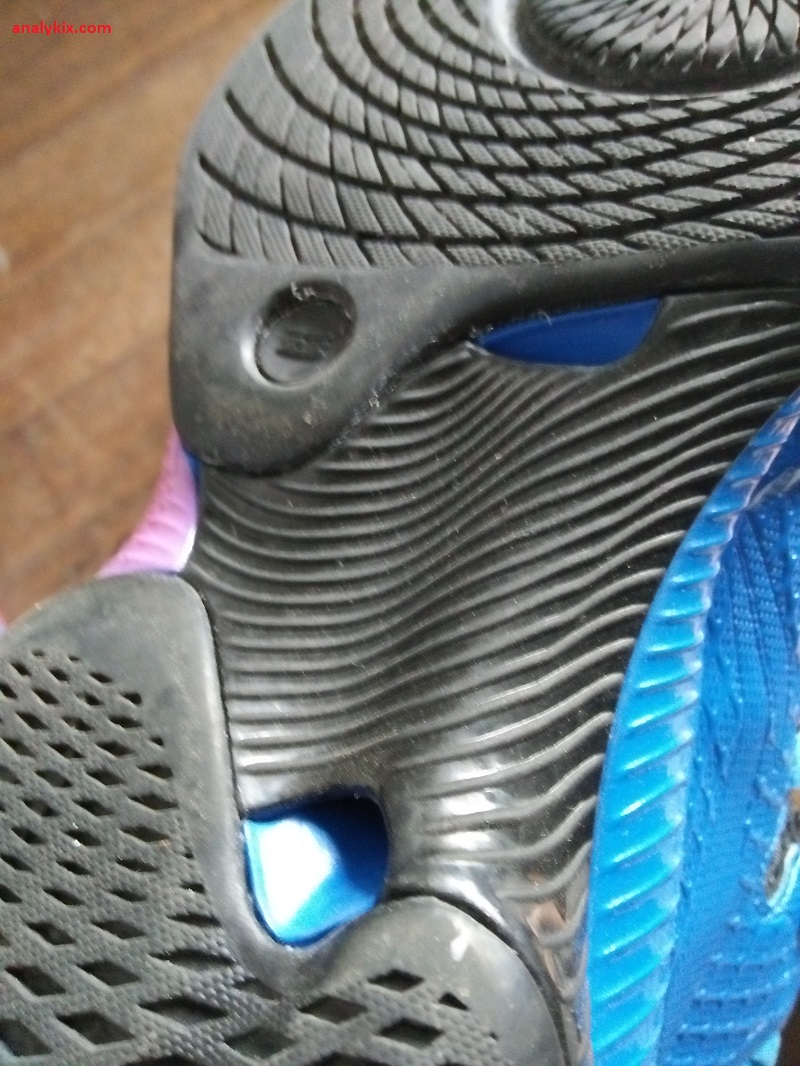 Fit is true to size so I was able to get a good fit on a size 9 which I normally do. As i said in the materials earlier, they used Dynamic Shell which is foam base to give you a custom fit. It is placed medially in the heel collar area and I think the fit could still be good on a regular material as long as you get your right size. It isn't noticeable and think that they'll be alright without it. You can also see in the laces that there are loops attached to the lacing system which would supposed to give you more lockdown. However, the effect will just be the same because it is attached on the upper material itself and not on the footbed. If you adjust the laces properly, then the fit would be just fine so this is a case where some gimmicks are just mediocre. I'm not knocking on the shoe, I just think that the shoe would be just fine without those because those things didn't offer too much to be noticed. The base is flat especially in the forefoot which I enjoyed. There is also a TPU plate underneath which helps a great deal for torsional rigidity. 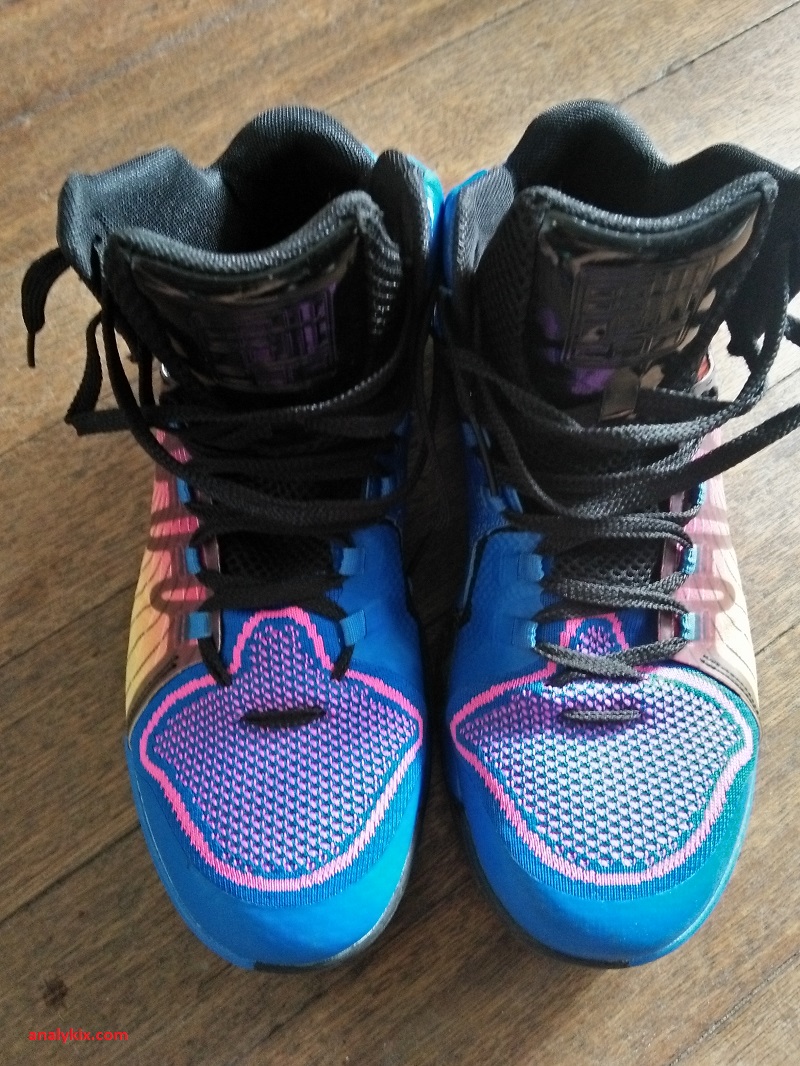 I got the shoe from In Soles and man, those guys are easy to deal with. You can also see this model in some malls. However, I got them for a much cheaper price of Php 3,500 and it is indeed a bang for your buck purchase if you ask me. They have a lot of Chinese brand kicks like Li-Ning, Anta, Peak, and 361 Degrees that are not easily available in Philippine malls. If you want some questions, you can message me on my facebook page and I could maybe help you cop a pair. 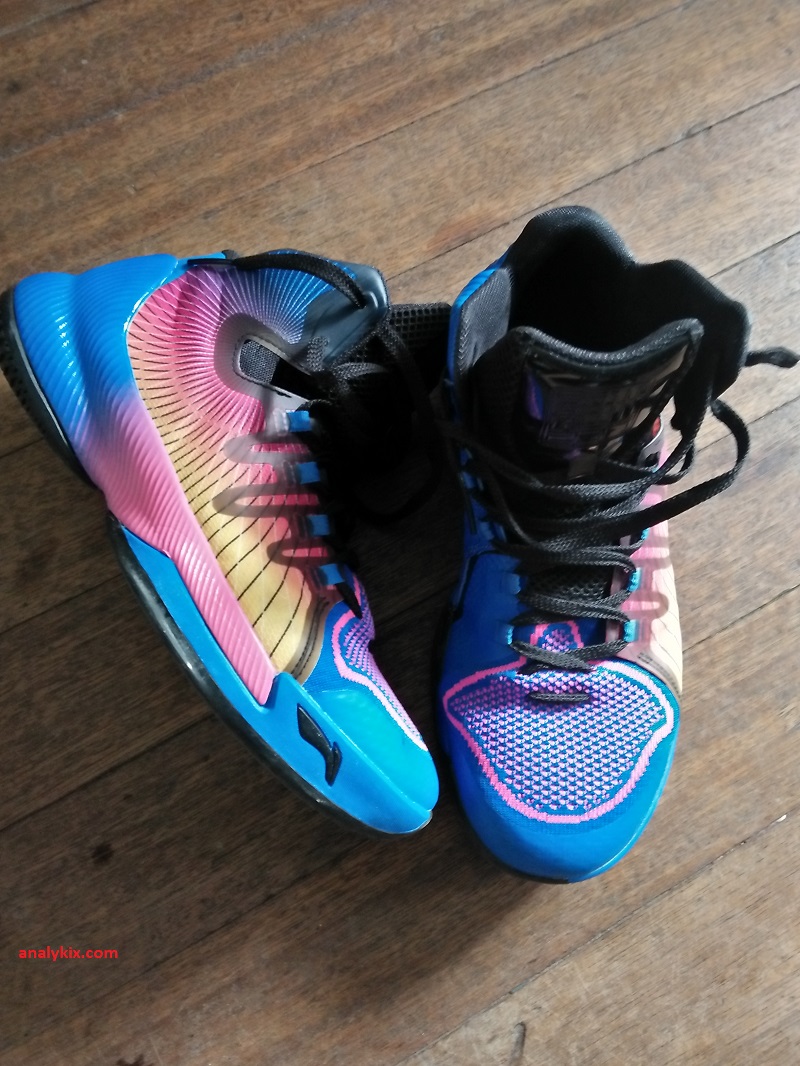 The Li-Ning Shadow Walker 2017 is a great shoe for its price of Php 3,500. Its lightweight build and low-to-ground feel is very ideal for guards. While the Dynamic Shell isn't too noticeable, it isn't too much of a bummer since the shoe's build is pretty basic to the point of the fit will still be fine as long as you get your right size. Cushioning isn't too bad either, I just prefer their Bounse cushion more. If you love court feel, then this might be a good choice. The outsole is really, really good which you can wear for both indoor and outdoor courts. This is a good shoe especially if you are on a tight budget and just ball casually. It uses modern materials and is durable as well.