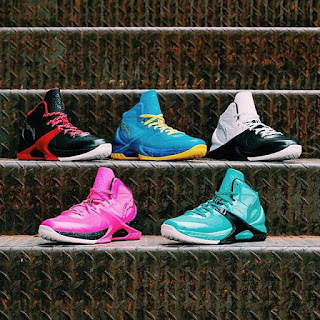 This shoe from Li Ning circulated the net today and it looks like another team model from Wade line. The shoe is called "The Sixth Man" features a synthetic fuse upper combined with mesh which is lightweight and breathable. In today's standard where most brands starting to utilize textile upper, this could still be a reliable source material as long as it would not cause irritation or hot spots to the wearer. There is a soft TPU wings in the midfoot that extends to the midsole to give you lockdown in the midfoot area, containing your foot inside the shoe especially when you tight the laces where the TPU wing is attached. No word on the cushion yet but I'm guessing it would be Bounce in the forefoot and Cushion in the heel (hopefully). The good thing about Li Ning is they are utilizing their cushioning techs in whatever models they have either it is a mid-level or their top-tier models. Finally, a solid rubber outsole with a combination of wavy herringbone and some story-telling traction patterns can be seen underneath the shoe. These come in 5 colorways as of the moment namely: Miami Heat Announcement (Black/Red), Chinese New Year Vision (Blue/Yellow), Origami Pink (Pink/Black), Liberty Light (Green/Black), and a Black and White colorway. If you are sold on copping them, these are available at the Li Ning online shop <HERE> for $96.99.