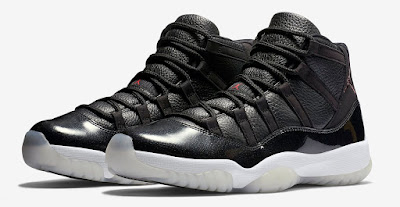 A lot of NBA fans are talking about the streak that is happening at the West Coast particularly the Golden State Warriors. While it is yet to determine how long will their streak continue, here is a shoe from Jordan that salutes to Michael Jordan and his team, the Chicago Bulls who made a record of 72-10 back in 1995-1996 NBA season. The Air Jordan 11 "72-10" features a tumbled leather with patent leather on the toebox that runs along the medial, lateral, up to the heel of the shoe. Black is the predominant color with red color for the branding. White midsole and translucent outsole was used for a classy finish. Rumor tells that there will be enough quantities of these so let's hope that there won't be too much hype (how I wish!). The shoe is set to drop on December 12, 2015 for $220.