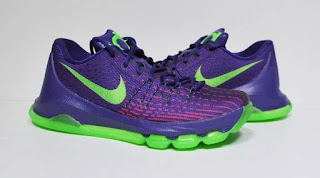 Another Nike KD 8 is about to drop this mid month. The Nike KD 8 "Suit" has a purple upper with hits of bright crimson in the forefoot area and green accent was used on the branding on both the swoosh and KD logo as well as in the outsole. This colorway gets its inspiration from Kevin Durant's suit when he gave his MVP speech back in 2013-2014 season. The shoe will drop on August 14, 2015 with a retail price of $180. You feelin' the colorway? Sound off on the description box below.