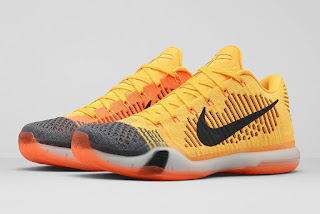 Here is a reminder to all Kobe X fans who are in the hunt of every Kobe X colorway. The Kobe X "Rivalry" drops today at Nike Stadium. Hues of orange, grey, and black are primarily used which represent the high school rivalry that happen many years ago in Philadelphia which Kobe Bryant played for. It was that time that his school (Lower Merion) defeated Cathedral Prep which carry this specific color scheme of orange and black. If you are already convinced on copping this colorway, head over at Nike Stadium (Rockwell/ATC/Shangrila/SM North Edsa/NS Century) which retails at Php 10,495.